Through difficulties to the stars
RAF March Past
Battle Over Britain (The Best of Wurlitzer Organ)
0:00/2:15

At a tad before my 18th birthday I decided to not wait for National Service conscription and elected to join the RAF. I had previously attempted to join as aircrew but failed selection on medical grounds. As the war in Korea was still coming to a close most conscripts were shunted into the army.

Along with many others I was consigned to RAF Cardington in Bedfordshire. This was where we were inducted into the RAF, received uniforms and kit and most importantly....had a haircut ! The huge hangar where all this took place was where the original R100 airship was stored during it's lifetime.

After processing at Cardington we were then shipped on by travel warrant to where we would undergo recruit training.....in my case as a 3 year regular I would go to RAF West Kirby near Liverpool on the Wirral peninsula

WHERE IT ALL BEGAN

Needless to say "square bashing" or 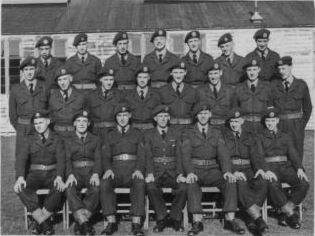 to name it correctly...recruit training, was
over a period of several weeks during which
time a hapless bunch of boys was finely
honed into a respectable military unit. I will
desist from the details of what was often necessary to achieve this, but while it is a savage memory, we all survived intact.
I am fourth from right middle row and the dreaded Drill Instructor
Corporal O'Toole is third from left front row.

PASSING OUT PARADE (NOW WE ARE SOLDIERS !!) 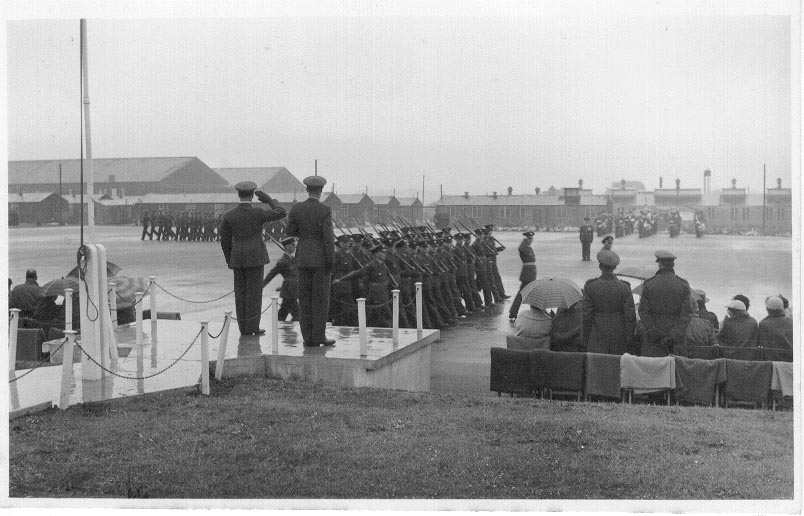 At the end of basic training the big day came around. We would pass out by marching in review order before the Station Commander who would take the salute. Our DIs had by now begun to soften a little as they knew we were going to put on a good show. They must have been pretty proud of each group they processed and we were all trying to ensure our Flight would be the best in the Squadron.

After the parade we were virtually finished with training and were given postings to our new camps where we would enter trade training or for some it was posting straight to an operational unit. Some were posted overseas from day 1 and there were mixed feelings dependent on where you were going. The Far East was considered a favourite whilst postings to the Canal Zone or Aden were not well received. My posting was to the major Transport Command operational unit at RAF Lyneham.

STAINED GLASS WINDOW IN THE CHAPEL AT RAF BIGGIN HILL.
MANY RAF TRADES ARE INCORPORATED
IN THIS WARTIME MEMORIAL WINDOW

If you got here in search of the above then please go to the Members' Recollections page to read items by members,
Alex Masson and Tony Sargeant, who both served on
Christmas Island during the nuclear tests.

Visitors by Country from 7th March 2011

Go quietly amid the noise and haste  and

remember what peace there may be

©James Aitken~Queensland~Australia All rights reserved. Please do not copy photos or text from this site without first contacting the copyright owner.